This video is a little…out there… so bear with me:-) Have a watch, it's only a minute long:-)

Outwardly ‘apple pie’, the Smothers Brothers fronted one of the most volatile and anti-establishment TV shows of all time. Beginning in the ‘wholesome’ conformity of post war America, the ‘Smothers Brothers Comedy Hour’ ran from early 1967 through to April 1969.

During this time, the country experienced a mass awakening of consciousness. Or a national nervous breakdown. Probably both. It depends on your point of view.

The Smothers Brothers were at the scene of the accident. They featured anti-Vietnam sentiment, sketches about religion and racism, references to censorship, mock presidential campaigns and the Who’s exploding drum kit.

After two years and many censorship battles the network ultimately fired the brothers for a skit about the Bible. Far more controversial content is now commonplace on TV. But the show’s intent, energy and gleefully stupid refusal to compromise is still ahead of the times.

The show champions the idea of variety: that other viewpoints, feelings music, experiences and types of people exist. Furthermore, that they should be visible and represented. Difference should not be censored out of life, the media or society.

It’s this approach that makes the Smothers Brothers Comedy Hour a political rather than a comedy show, as much today as back in the 60’s.

This video is a kind of a poem to the ‘Smothers Brothers Comedy Hour’ putting back in the historical context. The song is ‘Classical Gas’ by Mason Williams, who was also the head writer for the Smothers Brothers.

The photo animation style imitates two short films American Time Capsule and World of 1968 which were both featured on the Smothers Brothers Comedy Hour. Wikipedia informs me that these were made by Chuck Braverman (a filmmaker who I have recently gained much appreciation for).

Even using basic Windows Movie Maker, replicating the style this was… time consuming. And I had Google for the images and snapshots of video. God knows how he long it must have taken him back then…

One of the best thing about Christmas Shopping in London is that if it gets too hectic/rains too heavily; you can always nip into a convenient Church for a sit down. There are a lot of Churches in the Square Mile. In Medieval Times there were 88, however 1000 years and two Firestorms have culled their number to about 30. 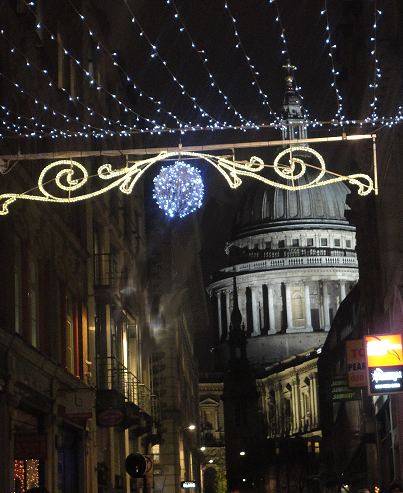 Although the fog was doing some creepy thing yesterday that made it look like the Angel of Death was descending.

That Cathedral isn't on my side. It knows I'm inconsequential. It's a great big watchy thing that has been watching for centuries and knows it'll watch for millennia after I am dead. It knows if it's in trouble all us tiny squishy mortal things have to run around risking our lives saving it. It's perfectly happy to let me eat my sandwiches on it's steps but that's only because it recognizes me as part of it's tiny mortal defense system.

In Christianity terms these Churches go from 6th Century onwards. Parts of them *cough* might technically have been for other Gods but *cough* leetttsss quickly skip over that :-) The good news is that the 4th Century Londoners near Canon Street were definitely celebrating the virgin Birth of a God on 25th December, in a belief system that had ritual baptism....the snag being it weren't Jesus. But the Church maintains that it was a plagiarized version of Jesus and that the 4th Century Britons had just confusedly bought a pirate dvd. 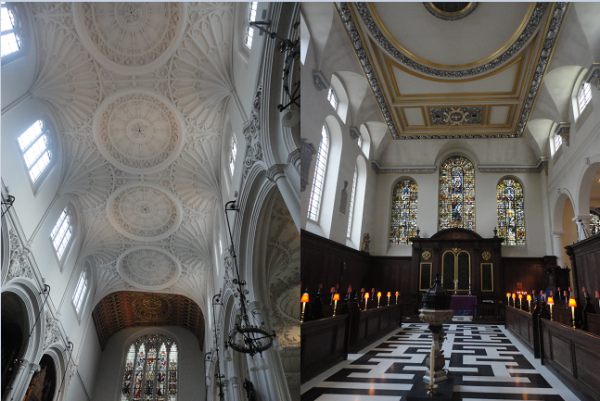 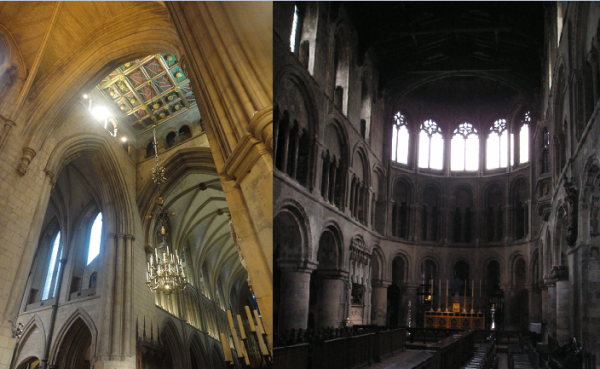 I got to say I'm not sure how confused the Britons were, I think they've always known what they've wanted. The Cathedral don't half feel like Stonehenge. The City is constructed like a giant orrery. The Cathedral in the centre like a Massive Star, and then the little planet Churches revolve around it. There's something so exquisitely Pagan about the whole thing.

p.s If anyone wants to see the Subterranean Church on Fleet Street [essentially numerous old sections of the Church that have gotten pushed underground when the new one was built on top] it's in the comments. It's also a Saxon burial ground and contains part of the Roman Road so it's extremely jumbled up down there...it does however have a very good central heating system. There is snow everywhere except the Forbidden Marshes, which are looking...um...forbidding. When Shovewood went to take the piccie there were crows cawing so she hurried back. We need help. We are looking for TV shows to watch this week and weve gone through all we can find and weve seen everything. We are looking for something to watch after work for an hour or two. We want it to be fun and vaguely happy though not too taxing. So no Cathy Come Home of Boys from the Blackstuff because thats too depressing and no West Wing type stuff because thats too wordy and complicated for me to follow when Im tired. Ideally it should be a series so we can look forward to watching more the next day and should probably have some scrummy actors we can squee over. It can be from any decade. We basically want a fun Man from Uncle\Robin of Sherwood\Doctor Who\Raffles type thing. We want the tv equivalent of a hot chocolate with cream and extra sprinkles. It doesnt even necessarily have to have David McCallum in, though obviously that would help.

Anything anyone remembers enjoying in the past four decades....

love some rather bored Meanies

In fact there's an awful lot of buried treasure underneath the sands of youtube but I've decided to start small by digging out these ten;

My favourite childhood film. Alastair Sim and Trevor Howard in the same movie! What more can a girl want. It's all tremendous fun.

Richard Attenborough in his juvenile delinquency period. If this film had been made a decade latter they'd have got baby McCallum for the lead.

John Mills in all his little adorableness braves the desert and nazis for a glass of beer, in the greatest advert for carlsberg the carlsberg marketing division could ever hope for.

I'm a fan of Hitchcock's train period.I can't believe this film was made in 1935- it's just so modern.

There is however this non train Hitchcock movie...

Recommended by dear Mr McCallum (he does show good taste) this film features Leo G. Carrol and a young George Sanders (Emory Partridge)....oh and Laurence Olivier is in it too.

I love James Mason- he's the Johnny Depp of his day. This film is an early 'spy who came in from the cold' and also features Claire Bloom. There's some fascinating footage of 1950s post war Berlin.

Surely everyone in Britain must have seen this movie, however it doesnt seem to get much play outside the UK. Its everything a war movie should be.

There... I'm going back with a shovel to see what other gems I can uncover.

The Serenaar and Assorted Meanies with assorted drinkies and snacks movie watching sleepover has now started! If anyone would like to join us, you will need:

Films:
- Some Like it Hot
- Robin Hood ( the errol flynn version)
- The Magnificent Seven
- The Rocky Horror Picture Show

We of the Meany clan have been mightly enjoying the nightly Torchwooding. It's not Doctor Who by any means but it's a nice quick fix. It's got vaguely Quatermass/Sapphire and Steelish for this week.

(note spoiler here now for non brit cousins. Though I imagine Georgie will have seen it by hacking in live to bbc transmissions or whatever it is she does.)

thebigbluemeany is a Laid-back Doer; go me! (dark yellow) Shovewood is a Spontaneous Idealist. (light yellow) We approve of any personality test where we get different results (except for the Colour personality test cause that says Shovewood is a sensitive, loving warm person and claims I am a selfish, egocentric, paranoid quick to offend individualist, (the cheek- it's got it in for me) so we ignore that one.

are friendly, happy persons. They enjoy being together with other people. Smart, eloquent, witty and charming, they like to be the centre of attraction. They do not like to be alone. Their zest for life ensures that others feel well in their company and that they quickly get to know people. Laid-back Doers get the best out of every moment - many people of this type have a gift for making their whole life one big party. Boredom is unknown in their presence because they are very good at carrying others away with their enthusiasm, their good mood and their optimism.

Abstract thinking and profound philosophising about the meaning of life appeal less to Laid-back Doers. They are pragmatic, realistic and live completely in the here and now. At work too, they prefer it when it’s all go and they can act out their purposeful manner to the full. They have no problem handling several tasks at once and they blossom out in crisis situations! A varied field of activity with a lot of social contacts is just the right thing for them. One will also seldom find them inactive in their spare time; due to their open, curious nature, they mostly have many hobbies and interests. They are not afraid of the unknown: as they are flexible and creative, they quickly adjust to new situations and make the best of them. They sometimes come into conflict with strict rules or hierarchies by which they quickly feel constrained and against which they rebel.


As friends, Laid-back Doers are generous, helpful persons who attach great importance to harmonious relationships and a good atmosphere. Their sociable manner means that they have a large circle of friends and they love having the house full of many different types of guests. They are happy to give in to their spontaneous moods and fancies in the just one or two important things. This makes them appear somewhat unpredictable to those with a quieter nature. When it really matters, you can rely on them one hundred percent. As partners, they are creative, impetuous and imaginative - as long as their partner knows how to fascinate them. They can hardly stand boredom or routine in a relationship. They do not like conflicts at all; if a relationship becomes too strenuous or involves too much effort, they tend to withdraw from the partnership and start to look for a new partner. However, if one manages to keep their curiosity alive in the long term and surprise them again and again, one has a loyal and loving partner.

Empire Magazine has revealed its list of the 50 Greatest TV Shows Ever.

LJ has a TV meme:
1. Bold the shows you watch
2. Italic the shows you've seen at least one episode of.
3. Post your answers.

The Bluemeanies have contracted a virus over their internet system. It's a spamming one and we apparently send 11,000 emails on Monday. BT have cut us off until the nasty nastiness goes away. Honestly it wasnt us- we are in no way evil technological masterminds. We are still trying to convince BT of this. It clearly is a dastadly plot of Thrush. Hopefully normal service will be resumed shortly
love the bluemeanies
Collapse